Ichabod Crane Athletics Accomplishments Recognized at Board of Education Meeting 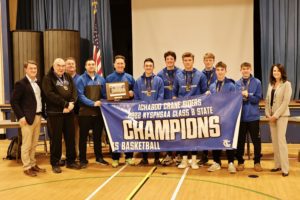 Finally, the Superintendent notes that our athletes are equally impressive in the classrooms as they are in the sporting arena.

Congratulations to the following winter sports teams on being named New York State Public High School Athletic Association (NYSPHSAA) Scholar–Athlete teams for the 2021-22 school year. In order for a team to qualify, they must have an average of 90 or above:

The dedication, perseverance and teamwork involved to reach this level of achievement is remarkable. The entire district and our community are so very proud of you.